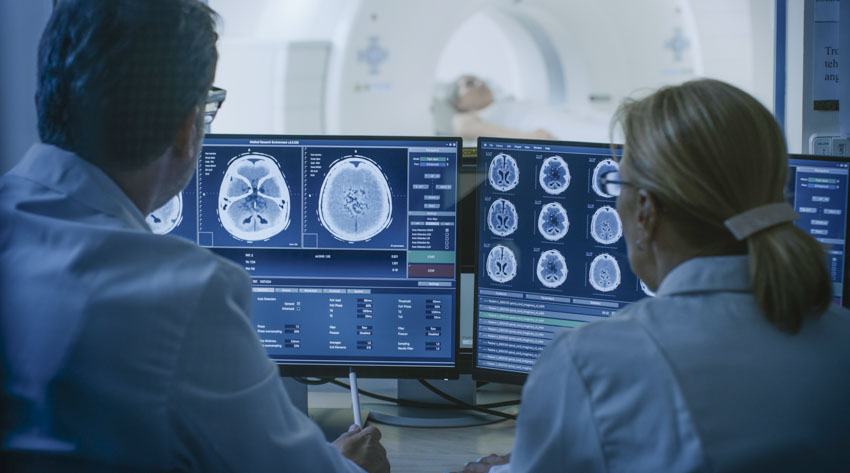 The researchers determined that true acupuncture triggers significant negative activation in the default mode network (DMN) and other brain regions specific to the Traditional Chinese Medicine (TCM) indications of Waiguan. The DMN is a network of highly correlated brain regions, which is active under resting-state conditions. In addition, they found that ischemic stroke affects the brain’s overall response to acupuncture. The healthy control group and the ischemic stroke group had different negatively-activated brain regions in the DMN when receiving true acupuncture. [1]

Design
The researchers (Zhang et al.) used the following study design. A total of 44 subjects participated in the study and were divided into two groups, with 24 and 20 subjects in each group respectively. The treatment group subjects were selected from the Nanfang Hospital and the First Affiliated Hospital of Guangzhou University of Traditional Chinese Medicine. The treatment group patients were diagnosed with ischemic stroke. The control group subjects included healthy volunteers.

After disinfection of the acupoint site, a 0.30 × 40 mm disposable filiform needle was tapped into the acupoint of each patient with a high needle entry speed, reaching a depth of 10 (±2) mm. Upon a deqi sensation, the Ping Bu Ping Xie (attenuating and tonifying) manipulation technique was applied, with a twisting range of 180 degrees and frequency of 60 times/minute. The manipulation was not employed for the first 30 seconds, it was then initiated for the second 30 seconds, and then stopped again for the third 30 second interval. The whole process was repeated continuously for a total of 180 seconds. The device was placed on the skin until the treatment session was finished.

Yang et al. also note that acupuncture at GV20 and GV14 (Dazhui) affect the contents and expression of signal transducers and activators of transcription (STATs). STATs are active in the Janus kinase STAT pathway and transmit information from chemical signals outside the cell, through the cell membrane, and into gene promoters on the DNA inside the cell nucleus (causing DNA transcription and cellular activity). Yang et al. note that acupuncture’s influence on STATs indicates that it activates self-protection and reduction of “apoptosis of the nerve cells in and around the ischemic focus.” This indicates that acupuncture has a neuroprotective effect for stroke patients.

This is Article from HealthCMI