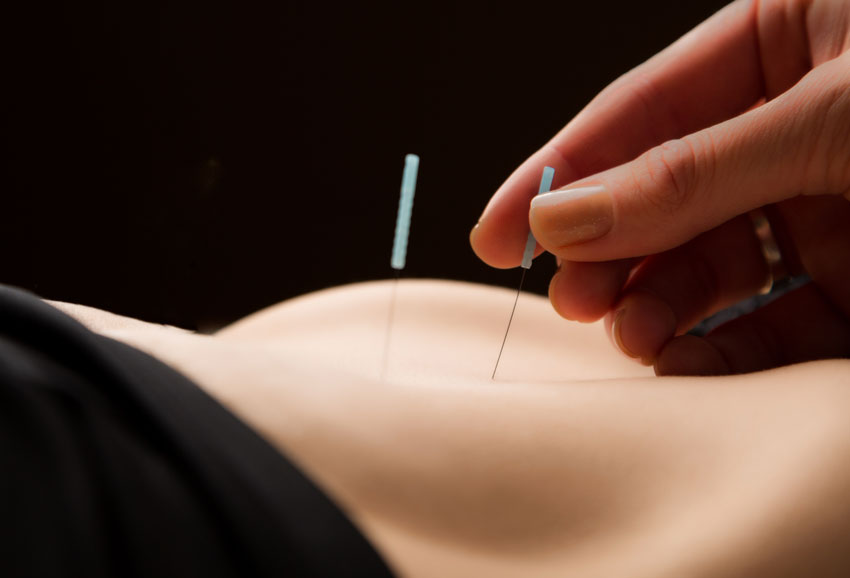 Dysmenorrhea
Diagnostic criteria for the study were abdominal or lumbosacral pain before, during, or after menstruation. Pain was described as dull, distending, or stabbing in nature, and was accompanied by nausea, vomiting, cold limbs, or cold sweats. The symptoms were cyclic in nature and, in some cases, so severe that they led to fainting.

The women were required to be ages 15–35 years, have a regular menstrual cycle lasting 25–34 days, and have received no related treatment in the month prior to the study. All women were approved by the hospital ethics committee and gave voluntary, informed consent to participate.

Herbs and Acupuncture
Women in the treatment group were prescribed a modified version of Huo Xue Hua Yu decoction, comprised of the following herbs:

The herbs were immersed in water and the resulting decoction was consumed warm, morning and evening. Treatment was administered from four days prior to the onset of menstrual bleeding until two days after menstruation ceased. This treatment was repeated for four consecutive cycles. In addition, women in this group were treated with acupuncture administered at the following acupoints:

Needles were inserted and a rotating technique was used to stimulate the acupoints. After the arrival of deqi, the needles were retained for 30 minutes. Needles were stimulated manually every ten minutes, a total of three times per treatment.

Herbal Control Group 1
The women in control group 1 were prescribed Huo Xue Hua Yu decoction as detailed above but did not receive acupuncture therapy.

Outcomes
The women were asked to rate their menstrual pain using the numeric rating scale (NRS) and were given a dysmenorrhea severity score according to official Chinese medicine gynecology research guidelines. A score of <8 points indicated mild dysmenorrhea, 8–14 points indicated moderate dysmenorrhea, and >14 points indicated severe dysmenorrhea. Uterine arterial blood pressure resistance index (RI) was measured by B-mode ultrasound scans. B-mode (2D mode) captures two-dimensional images and visualizes anatomical structures. Assessments were made before and after the four-week study period and at a three-month follow-up appointment.

Adverse Events
Throughout the study, the women’s heart rates, blood pressure, body temperature, and liver and kidney functions were monitored for adverse events. No adverse events were reported in the treatment group or control group 1. However, in the ibuprofen control group 2, there was one case of increased irritability, and one case of reduced appetite. Neither of these events were classified as serious, and all women completed the study.