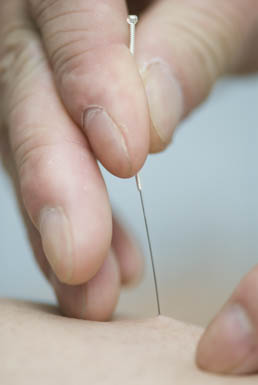 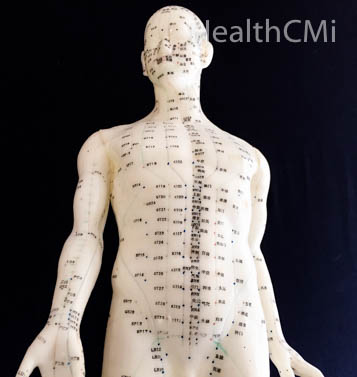 Researchers find acupuncture effective for alleviating chemotherapy induced peripheral neuropathy (CIPN) for patients with colon cancer. Neurotoxicity from chemotherapy may damage nerve fibers and lead to symptoms including pain, burning sensations, tingling, muscle weakness, balance disorders, paresthesia, dysesthesia, cold or heat sensitivity in the hands and feet, and a “glove and stocking” distribution of symptoms. The paresthesia is often experienced as a bilateral pins and needles sensation. Severity ranges from mild to debilitating. The researchers summarize their findings into three main benefits of acupuncture for patients with CIPN:

The research was conducted at the Cancer Treatment Centers of America at the Southwestern Regional Medical Center located in Tulsa, Oklahoma. The investigators applied Traditional Chinese Medicine (TCM) style acupuncture to 10 patients with chemotherapy induced peripheral neuropathy. They note that “all of the patients reported or had improvement in their CIPN grades after starting acupuncture.”

The researchers note that using customized acupuncture point prescriptions in the TCM style produces superior patient outcomes when the use of distal acupuncture points are employed. The researchers emphasize the need for customization of the acupoint prescriptions per each patient’s differential diagnostics for maximum clinical efficacy. In addition, they emphasize that distal acupoints “increase blood flow” and therefore have an especially important role in the treatment of CIPN.

The researchers note that CIPN symptoms are “typically dose-dependent”. As a result, CIPN may limit the amount of chemotherapy a patient can tolerate thereby interfering with the efficacy of anticancer therapy. This is particularly prevalent with drugs containing platinum including oxaliplatin, an important drug in the treatment of colorectal cancer.

Platinum based medications often have both acute and chronic adverse CIPN effects because they “produce direct damage to dorsal root ganglion (DRG) neurons.” The researchers add, “Cisplatin, taxanes, and vinca alkaloids have also been shown to exert damage to microtubules resulting in the disruption of axonal transport and thereby signal transduction in these nerve fibers.” The researchers note that “acupuncture for the treatment of CIPN has several advantages.” They note that “side-effects are minimal and it has been shown to be safe and effective in preliminary studies.” An additional benefit to antitumor therapy, they add that studies indicate that acupuncture regulates the immune system.

Acupuncture Treatment
The researchers note that the data indicates that “TCM-based acupuncture, prescribed frequently and aggressively, and focused on the distal extremities may be effective for preventing and treating CIPN.” They add that an aggressive treatment would, at a minimum, employ the following acupoints:

The researchers note that aggressive acupoint therapy was not always needed to produce clinical results and some patients are too weak to receive aggressive therapy. All acupuncture needles used were between 1/2” to 1” in length and were between 36 – 38 gauge. For this investigation, DongBang brand acupuncture needles were used. For the Ba Feng, Ba Xie, and Jing-well acupoints only guide tube insertion of the needles was employed. Needle retention ranged between 10 – 45 minutes per acupuncture treatment session with an average of 20 minutes per session. Electroacupuncture was not administered.

The research indicates that an integrative medicine approach to chemotherapy for colon cancer patients has several benefits. Patients experience an improvement in the quality of life including better functionality and comfort. In addition, reduction or elimination of CIPN reduces symptomatic interference with the quantity and frequency of chemotherapy treatments. The researchers note, “In the current authors’ treatments, the goal is to combine Eastern and Western practices in order to best provide for the patient.”

Acupuncture Theory
The investigators provide TCM theory as it relates to CIPN. According to TCM principles, CIPN is caused by qi and blood flow abnormalities. They note that blood nourishes tissues and qi moves blood to the tissues. The researchers note, “CIPN results from the body lacking nourishment to the muscles (Blood) and the body not directing the Blood to the limbs (Qi).”

The authors provide TCM theory as it relates to colon cancer. Tumors are often a form of stagnation resulting from disruption of circulation. Heat stagnation is also common with colon cancer patients and is indicated by “an area that feels hot to the patient, red tongue, rapid pulse, dry stool, and constipation.” Toxin stagnation is also common and is often produced by exposure to chemotherapy. Phlegm or damp stagnation is common with fatty tumors and is often concomitant with the following symptoms: mucus in the stool, loose stool, slippery pulse, puffy tongue, a feeling of heaviness. Qi stagnation may occur and is characterized by: flatulence, bloating, irritability, moving pain, purple tongue. Blood stasis is indicated by sharp or stabbing pain, an immovable tumor, dark stools, and difficulty with defecation.

The authors note that their overall clinical impression of cancer patients is that they have a deficient constitution. They note, “the body is not strong enough to move energy to all of the tissues. Therefore, the energy stagnates. This is often the case with CIPN.” They add, “Acupuncture is an effective treatment option for CIPN because acupuncture not only stimulates the body to send blood flow to the site of the needle but also helps strengthen the underlying condition of Deficiency.” The authors note that by applying acupuncture to the extremities “it will act as a local therapy bringing Blood and nourishment to help treat the damage caused by chemotherapy.” Moreover, the authors note that “by strengthening the body against its underlying Deficiency, acupuncture helps restore balance to the body.”